44 year old Janet Bannister has been a high achiever ever since childhood. She started a successful muffins business during summer when she was only 14 years old with her father’s mentoring. She graduated at the top of her class at the University of Ontario’s Ivy Business School and has twice won the Canadian National Triathlon championship.

After studying she joined Procter and Gamble as a Brand Manager and oversaw the Pampers, Cascade and Vicks brands in Canada. After four years, she left to backpack solo across Southeast Asia.

While working for eBay Canada she realized that “Canadians spend a ton of time online … but they prefer to transact offline”. So she convinced the management to start Kijiji, the online classified business. It was so successful that it is now moved into more than 30 countries and is the top classified ad site in Canada with 11 million visitors monthly.

Then she started consulting and advised companies such as Starbucks, Indigo and ING Direct.

After three years as a Consultant Janet realized she needed more business experience to stay relevant. She then worked as CEO of online fashion startup the Coveteur for two years.

Her latest move has been joining Real ventures, a nine year old Montreal early-stage venture capital firm in 2014. Since then, she has led 10 investments for Real out of its $89 million third fund. Four out of these investments are in financial technology firms.

“I feel extremely lucky to be working with [entrepreneurs] and I feel it’s my mandate to help them be successful in any way,” Bannister says. “If that means just getting out of the way, that’s good, and if it means me getting my hands dirty, that’s good, and if it means just sitting down and having coffee while they complain … that’s fine too – whatever I can do to help them”.

“The low Canadian Dollar is a big help for many Canadian tech startups, as their costs are in Canadian Dollars but most startups derive the majority of their revenue from U.S. dollars.” Janet commented.

She looks for a big idea and a big vision in an investment. Something that can grow to be a $100 million business.

Business Opportunities in Calgary for out of Work 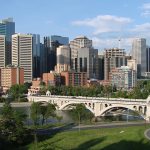