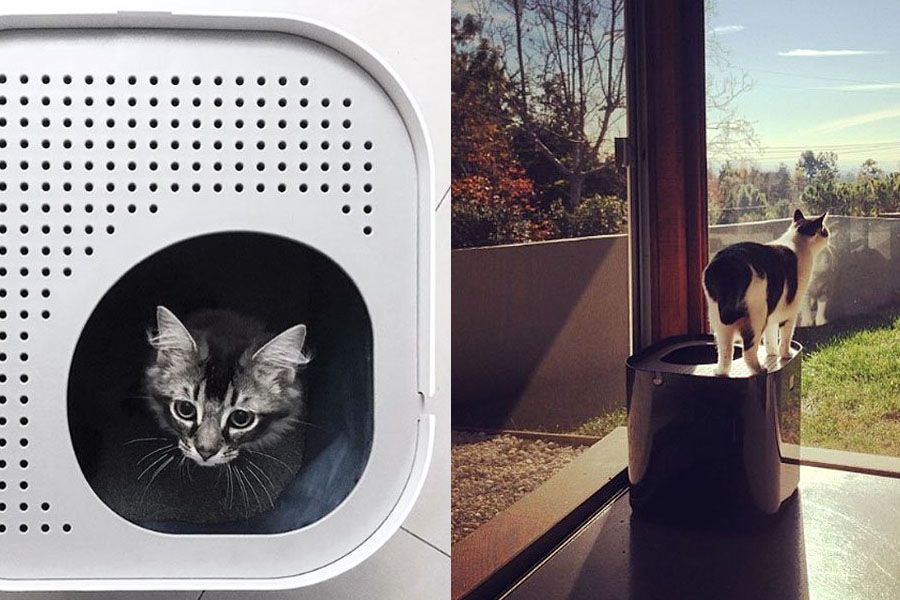 People commonly think they have to settle for a litter box that does nothing to complement the rest of their home’s interior decor, but they don’t have to. You can swap out the plastic bin you call a litter box for a modern version that will have your cat wondering why you didn’t choose this litter box to begin with.

Not many manufacturers apply visually appealing designs to their litter boxes, but Modkat proves to break that mould. Modkat created their Modkat Litter Box to keep your design sensibility intact, so your litter box won’t stick out like a sore thumb amongst the other items in your household.

Keep reading for a detailed review of Modkat Litter Box.

For those worrying about whether this litter box is comfortable enough for their cat, Modkat made sure that there is enough room for it to go ahead and finish its business in peace. You may think its enclosed design creates a claustrophobic environment, but cats have no problem jumping in and releasing their waste.

On top of your cat being comfortable in its litter box, another thing to keep in mind would be if you need to make additional purchases to use the actual litter box. Some manufacturers purposely disregard including the extra tools needed to maintain and clean a litter box.

Modkat goes above and beyond other litter box manufacturers since Modkat Litter Box is an all-in-one solution for cat owners. Essentially, this device comes with all the tools you would need to clean Modkat Litter Box effortlessly.

Modkat Litter Box comes with an easy-open lid that swivels, a hanging litter scoop, a reusable tarp litter, and a seamless base that prevents spills. This litter box also has odour-free features that play a role in making cleaning Modkat Litter Box as easy as washing some dishes.

Modkat was founded to provide a solution to a market that was severely lacking in diverse and modern items. In fact, one of the founders searched through hundreds of litter boxes for his pet cat until he realized that he would have to design one himself.

It took the people over at Modkat around two years before releasing Modkat Litter Box for consumers everywhere. Modkat Litter Box had undergone multiple cat testing trials before the company felt comfortable enough to make it available for purchase.

The testing came in handy since Modkat was awarded The Editor’s Choice Award for Best Accessory at the 2009 International Contemporary Furniture Fair. One year later, Modkat Litter Box won the esteemed Red Dot Award for its ability to outperform traditional litter boxes, which proves its superior, innovative design.

Since Modkat comes with all the cleaning supplies you need, maintaining the unit is an effortless process that you can finish within minutes. The reusable tarp liner is designed with handles, so when it’s time to scoop out the soiled litter, you can pull it out by its handles and proceed to complete the cleaning process.

Since the reusable tarp liner contains odour-free technology, you can go for two to three weeks without changing the litter out. Experts recommend spot cleaning Modkat Litter Box about two to three times a day, so your cat is free to dig around without getting its paws dirty.

Once your cat is finished using Modkat Litter Box, it’ll jump out of the entry hole and wipe its paws on the lid, which serves as a walk-off mat. This unique patented design promotes a litter-free home since the walk-off mat will keep your cat’s litter in the box rather than on your floor.

Some cats refuse to use the walk-off mat and jump right off the litter box, which is entirely normal. You can train your cat to use this feature if you care about litter tracking around your home.

Buyers love Modkat Litter Box because it’s a modern cat litter box that can be placed anywhere in the house and doesn’t emit any unwanted smells. Both you and your cat are going to be thrilled when you bring a Modkat Litter Box home.

Based on positive customer reviews, Modkat Litter Box keeps your cat’s waste remains out of sight and out of mind to give your home a clean and fresh quality that most litter boxes can’t create.

Even the additional tools, such as the scooper, are made of higher quality materials than if you were to buy it separately, which is extremely hard to find in the pet care industry. In fact, buyers are willing to pay more money for Modkat Litter Box since top-quality products guarantee.

Where Can I Buy?

Out of all the online retailers selling Modkat Litter Boxes, Amazon is the ideal place to place your order. For under $100, your cat could be taking advantage of doing its business in the comfort of a Modkat Litter Box.

I would highly recommend buying Modkat Litter Box since it combines modernity with simplicity to create the ultimate litter box that will result in a happy kitty.