IP Vs Analog Cameras: Is It Worth The Switch? 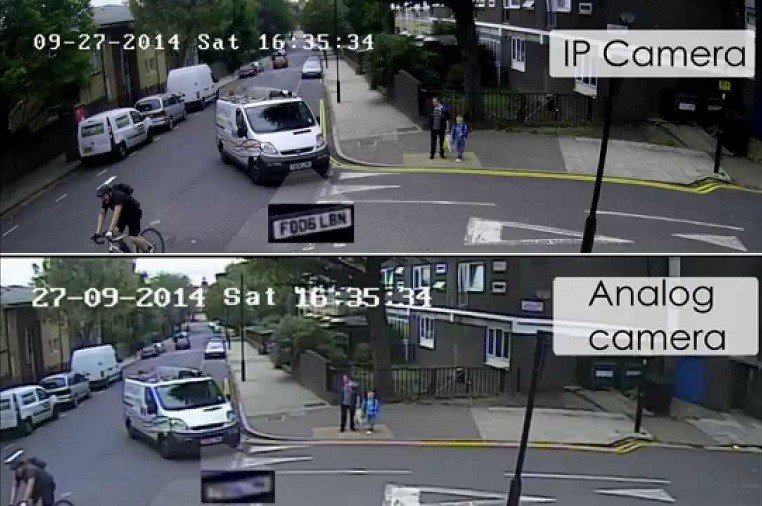 No home security system is complete without the addition of security cameras and video recorders. Even though they are critical parts of any secure home, selecting the suitable camera types and styles for your home is not always easy.

Security cameras need to be functional and sturdy enough to handle exposure to extreme conditions, including heat, cold, and rain. Moreover, you need to select between different video recorders with additional features when comparing IP vs analogue cameras.

With one in every five crimes being a burglary, it’s more important than ever to create a secure environment to safeguard your family and valuable possessions.

This article will discuss the difference between IP cameras vs analogues, compare them head to head, and let you decide if it’s worth making the switch from analogue to IP cameras.

The most common types of video surveillance cameras are analogue models. Analogue cameras send videos via a digital signal. This transmission is then converted and delivered in a format that can be interpreted by a monitor, television, VCR player, or other analogue devices.

The most significant advantage to analogue cameras is that they don’t come equipped with internal web servers, so they don’t require much technical knowledge, maintenance, or setup. Having control of recording equipment is what allows you to access the video recordings later on.

Analog cameras need to make use of a digital video recorder or DVR to store videos. Moreover, these traditional cameras require specific wiring connected directly to a DVR, which has to be located no further than 1000 feet away from the recording unit.

IP cameras, also called IPTV or digital security cameras, are advanced video recording options regarded as an upgrade over traditional models. The main reason for this is that digital cameras are more flexible and offer higher quality recordings.

Because they offer higher resolutions and better video quality, IP cameras allow easy facial recognition, license plate identification, and the ability to zoom into distances of more than 100 feet.

Digital security cameras boast numerous features that traditional models don’t have. For instance, an IP video recorder can provide motion detection or image compression features, depending on the model of your camera.

Similarly to analogue models, IP cameras use storage devices known as NVRs, or network video recorders, to store the images they record. Digital security cameras come in various shapes and sizes, but they can be classified into one of the following categories:

Choosing the correct type of cameras for your home will depend heavily on the size of your house, the neighbourhood you live in, and the quality of the recordings you want.

Keep in mind that more than half of all burglaries committed in 2015 came during the day time2, so having a high-quality camera can help identify the culprits if worse comes to worst.

Your budget will also be a significant factor as IP devices tend to be a bit more expensive, but they offer better video quality. There are four major factors you need to consider when comparing IP vs analogue cameras head to head.

One of the most significant setbacks of analogue cameras is that they require a considerable amount of wiring. Most traditional video recorders need to be connected to DVR while featuring a separate power connection.

IP cameras don’t need to be connected directly to the NVR device to store video recordings. Instead, you can use switches to connect two or more cameras and send a single line to the NVR recording in a tree-style configuration.

Lastly, because digital security cameras can use Power Over Ethernet, or POE, the network wire can double as a power source as well, reducing the amount of necessary work at least by half.

Digital cameras often feature video analysis, which can flag specific events that occur in its field of vision and tell you exactly when they happened. These can range from tampering with the camera to moving specific items and simple motion detection.

One of the most significant differences between analogue vs IP cameras is picture quality. Digital cameras offer considerably better video quality, so you can identify facial features or zoom in read license plate numbers.

Although the concept is the same, there are some key differences between NVRs and DVRs. Digital video recorders need to be connected directly to analogue security cameras and are often limited to a set number.

NVRs allow for tree-style connections so that you can use a switch to link several cameras and send the video recordings through a single line directly to the recording device. This means you can connect several different cameras to a single device, as long as it’s powerful enough.

There is no doubt that IP cameras offer a significant upgrade when compared to traditional models. However, you have to consider that they are a hefty investment, so you want to make sure you find the perfect model for your home.