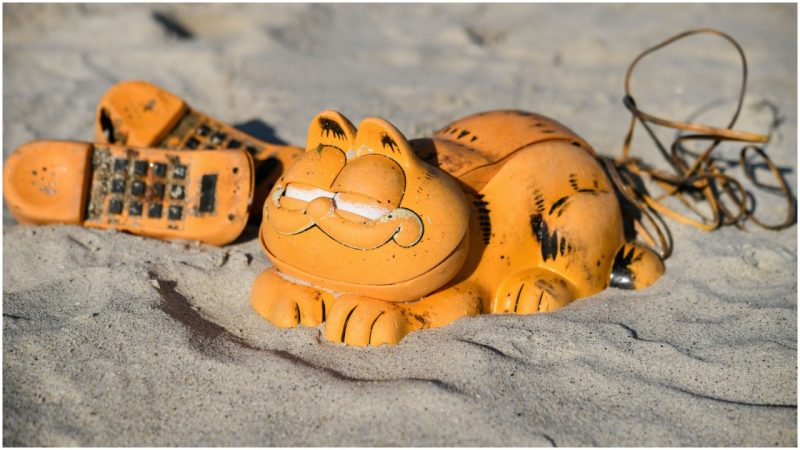 Garfield phone mystery solved – it was a lost shipping container. A French coastal town has over the past decade seen many Garfield telephones wash up on the shore. The origin of the phones remained a mystery, and beach cleaning teams have been collecting pieces of the phones over the years.

Since the 1980s, the Iroise coast in Brittany has received a supply of bright orange landline novelty phones shaped like the famous cartoon cat; a BBC report said adding that now the source of the problem has been found – a lost shipping container.

Garfield is an American comic created by Jim Davis. Published since 1978, it chronicles the life of the title character, Garfield, the cat; Jon Arbuckle, the human; and Odie, the dog. Garfield holds the Guinness World Record for being the world’s most widely syndicated comic strip.

The lasagna-loving cat had sold a lot of merchandise over the years with a popular one being the Garfield telephone, a cat-shaped phone which would open its eyes when the receiver was picked up.

“Once a common household item, the Garfield phone’s eyes open when the landline receiver is picked up, and thousands were made and sold during the 1980s. Collectors still buy and sell the vintage Garfield phone online today,” the BBC report said.

The report added that beach-cleaning teams had long suspected that a lost shipping container – perhaps blown overboard – had regurgitated its orange cargo. But they had never been able to find it.

Last year, campaigners from an anti-litter group made the novelty phone a symbol of the plastic pollution on the beaches of the Finistère region – part of which is a designated marine park.

The media attention on the new campaign, however, drew the eye of a local farmer who remembered the first Garfield phone appearing after a storm in the early 1980s, when he was a young man. He also knew the location of the container – in a secluded sea cave accessible only at low tide.

Anti-litter activists went down to the cave to look for the lost container. Inside a rock fissure, they found orange plastic poking out from beneath the rocks. The container appeared to remain somewhat buried after three decades.

The challenge of plastic pollution – a hot-button political issue over the last year – is not necessarily reduced by solving the mystery.

The container remains inaccessible, and it is not known how much of its cargo is sealed within it. Another issue is that the novelty items that escaped and continue to wash up on Brittany’s beaches will not decompose in a human lifetime, the BBC report added.